THE DAME WAS A TAD POLISH is now available 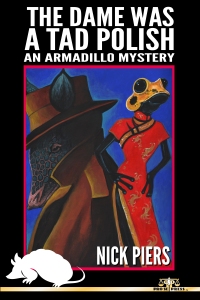 My second novel (and second Armadillo Mystery!), THE DAME WAS A TAD POLISH is now available. You can get it right now on Amazon.

Check out my publisher’s write-up on the new book.

THE HARD-BOILED DETECTIVE WITH A HARD SHELL RETURNS! THE DAME WAS A TAD POLISH: AN ARMADILLO MYSTERY DEBUTS!

Known as an innovative publisher of Genre Fiction, Pro Se Productions proudly announces the release of its latest novel, featuring one of the strangest and most popular characters to ever grace a Pro Se cover. Author Nick Piers first debuted Dilbert Pinkerton, his anthropomorphic armadillo private detective, in fedora and trench coat, in The City of Smoke and Mirrors. Now Dill has returned and this time, it’s a case of a murder in THE DAME WAS A TAD POLISH: AN ARMADILLO MYSTERY!

“Nick Piers,” says Tommy Hancock, Editor in Chief of Pro Se Productions, “has done something wonderful with Dilbert Pinkerton. He has taken an established genre and character type -the PI tale and the hard-boiled gumshoe – and turned it on its ear in a way people have been looking to do for decades. In a world beleaguered with zombie detective and vampire PIs and so on and so forth, Nick’s fevered and fantastic imagination has given birth to a truly revolutionary take on the character. Not only that, but Nick’s style of writing takes what is essentially a comic book type universe which Dill lives in and turns it into a world Chandler and Hammett may have conceived. Don’t let the carapace fool you. Dill is the real detective deal.”

‘The name’s Dilbert Pinkerton: mutant armadillo, private detective. I dig for the truth.’

The truth was, Dill had collared his first murder mystery since moving to Nevermore Bay and it was a doozy. The victim was found impaled on a flag pole nearly thirty stories high, innards spilling all out in the open like they decided to take a vacation from his body. Although the police called the strangest detective to ever wear a shell and fedora in to consult, the powers-that-be weren’t fond of having him around. Neither was the star witness in the case.

Lily Pad – TV actress and mutant frog – lived across the street from where the body was found, her apartment window lining up in perfect view of the dead guy. Almost like the murderer wanted to make sure Lily saw it when she’d open the curtains in the morning, drinking her morning java. Being the seasoned hard boiled detective he is, Dill is sure the actress is hiding something, that she is connected closer to this case than she lets on.
Worse, anti-homoanthro sentiment is already pretty strong, what with Dill making a splash in the city the way he did. To solve the case, Dill takes every risk to get close to Lily, not only to find a killer, but to keep her safe until all this comes to a head. Before she loses hers.

Writer and creator of the Armadillo Mysteries, I've had a passion for the creative arts all his life. I'm an avid comic book fan, a DDP yoga practitioner , and urban cyclist.
View all posts by Nick C. Piers →
This entry was posted in Dilbert Pinkerton, Writing and tagged anthropomorphic, armadillo, Books, Dilbert Pinkerton, mystery, novels, Science Fiction. Bookmark the permalink.