The City of Smoke & Mirrors Writer Commentary (Part 2 of 3) 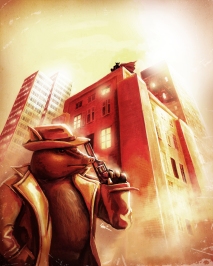 Chris Shehan’s second stab at the cover. Dill’s missing his muttonchops, though.

Well, it’s long overdue, but here’s the second part of my behind-the-scenes commentary on my first novel, The City of Smoke & Mirrors. You can read the first part right here.

As before, this is written in point form, kind of like an IMDB page. It’s also written with the understanding that you’ve already read the book, as it’s very spoiler-heavy.

-We get our first look at The Buzzard’s Aviary. In other words: The Batcave. It was fun making up memorabilia to fill it. The giant, mechanical bull was Bison’s, of course. Not sure what the story behind that was. I should think about that sometime. The Kabuki mask and razor sharp hockey sticks references characters that I haven’t introduced yet. Full disclosure? I have no clue about the giant, pink fuzzy dice. Something fun to throw in, I suppose.

-Now that I’ve gotten to know Dill a little better, I think he’s a little too cocky in this chapter. I should’ve made The Buzzard a little more intimidating, but this also showcases Dill’s sniffing abilities.

-I knew at some point, someone would have to call him The Armadildo. That’ll probably come back at some point with another character.

-Here we learn Dill’s a big wrestling fan. Some of the referenced wrestlers were from The Spirit of Wrestling, the old tabletop wrestling role-playing game friends and I played in high school.

-I feel like this part was a bit rushed, but I wanted to skip Dill’s recovery and get back to the mystery. Looking back, it feels a bit clunky, especially since Don Komodo was supposed to be hot on his heels. I had an idea in retrospect where I’d steal the hospital escape scene from an old Steven Segal movie (Hard to Kill), where Dill would escape from some dirty police officers. Eh, maybe for another book.

-Fortunado Prison: another reference to Edgar Allan Poe. Fortunado was a character in his short story, The Cask of Amontillado.

-I can’t recall who Liz Sanders was referencing. I remember she was originally Roz Goldstein, who was Jack Kirby’s wife. Not sure why I bothered with a full name, honestly, since she isn’t a major character.

-I enjoyed writing the short biographies for the officers. Overall, though, I don’t think they served much purpose. We don’t really get to know each of the officers all that well. I tried my best to have each of their personalities show through their actions and dialogue, though.

-Much like the third chapter, this is kind of an infodump. More information I regret I couldn’t add organically, instead.

-And here we go with torrential downpour of Batman creative team references:

-While I wanted The Buzzard to have a sidekick, Paul Cooke wasn’t originally intended to be it. I originally pictured a high school student, not another officer. But as I wrote his biography, I figured since he was the youngest of the group, it could work. And then I retroactively made him having an affair with Alana. Again, kind of clunky in retrospect, but I guess it could’ve been worse.

-The title is meant to be a play on “steak, bacon, and eggs.” This was a dish my girlfriend at the time loved eating at a local diner in Toronto. It’s supposed to be a pun to go with “stakeout and breaking & entering,” but I think it was lost on most readers. It’s kind of awkward.

-I feel like Dill’s stakeouts often involve watching from a burrow of his own making. As many as would be possible within an urban environment, anyway. The moment I created him, it was one of my first ideas involving an armadillo private detective.

-I think the Alana/Paul love affair was awkwardly handled. They didn’t hide it too well and Reg was actually okay with it. I could’ve added some more drama among that, maybe. If I’d planned out the affair ahead of time rather than throwing it in halfway through the book, it would’ve been set up better, I think.

-The random shouting from Alana/Paul’s fornicating still makes me giggle. No idea what they were really up to and I prefer it that way. Better to let the reader imagine it. Especially the bunny ears. That just sort of came out of nowhere while writing.

-I liked how some of the random shouts from Alana/Paul lined up with Dill’s snooping. Like Paul shouting “Now we’re talking!” when Dill picks the lock. That’s a gag I really need to use again sometime.

-For a well-trained vigilante and police officer, I think Paul got taken down too easily. I suppose in his defense, he was naked, startled, and maybe a little exhausted from all the naughty time with Alana. If I’d written it now that I know Dill better, there’d be more of a struggle. An awkward, naked struggle.

-Alana’s backstory and motivations for selling out her father could’ve been better written. Blame it on the fact that I struggled with how much of a villain she really was. A lot of people liked her multifaceted character, though. Guess I lucked out there.

Chapter 17: Down and Dirty

-Another gimmick I figured out quickly during Dill’s creation was his interrogation methods. No one else could bury themselves alive with a suspect and interrogate them underground. Being five-foot-nothing and a lousy fighter, I knew Dill would be the type to play dirty; dirtier than your average private detective. You’ll see other unusual interrogation methods in later books.

-While it was necessary exposition, I think this interrogation scene ran on too long. I honestly wasn’t sure where or how to include The Buzzard’s sidekick into the book. I had the idea at first that he operated separately, like a fanboy who wanted to meet him. And that sort of happened a little in Paul’s backstory here.

-It’s kind of awkward that Paulie worked so closely with The Buzzard (and other officers) without knowing who he was. Doesn’t really make sense when I think about it too much. I think Paul’s inclusion within The Buzzard’s circle, along with his affair with Alana, could’ve been handled much better. That’s what I get for trying to include an important side-plot halfway through the book.

-When I researched fancy cars that would be parked at Alana’s party, I came across a 1934 Ford Model B. I thought that kind of car would be Dill’s dream car. So of course, it’s the first thing he decides to steal during his escape from the buzzards.

-I don’t know much about cars, so I don’t know if the physics of this car chase are accurate. Then again, it’s a book about a mutant armadillo and a nutcase dressed as a bird of prey set in a superhero world. So reality isn’t exactly a requirement, is it?

Chapter 19: Living it up at the Motel Sunnyside

-This chapter’s title is a play on The Eagle’s Hotel California.
-Not much to say about this chapter, really. It’s sort of filler between the meatier scenes.

Chapter 20: Life on the Side Roads, I Wanna Drive It

-This chapter’s title plays on Tom Cochrane’s Life is a Highway. Turns out, even though I’m not big into music, I enjoy using known song lyrics for a lot of chapter titles.

-Dill’s backstory is discussed a little. To be honest, I’ve yet to really fill that in, even in the back of my mind. It’s still sort of rough. Which is fine for now; I can make it up later. I know generally where Dill came from and that’s good enough for now.

-A lot of people liked the way Alana is portrayed here. Some people didn’t think her “Am I pretty?” line was in character. Others thought it suited perfectly within the context. I’m kind of in the middle. I think it’s fine, but looking back, I could’ve come up with something better.

-I can’t remember which, but either Alana or Mickey originally hadn’t joined along. I want to say Mickey.

Writer and creator of the Armadillo Mysteries, I've had a passion for the creative arts all his life. I'm an avid comic book fan, a DDP yoga practitioner , and urban cyclist.
View all posts by Nick C. Piers →
This entry was posted in Dilbert Pinkerton. Bookmark the permalink.