From Punisher #8. Art by Leandro Fernandaz

Ever since his debut in the second season of Netflix’ Daredevil, I’ve been thinking a lot about Frank Castle; a.k.a.: The Punisher. So much, in fact, that I broke down and bought the first complete collection volume of Garth Ennis’ second run on the title, under Marvel’s Max imprint (Amazon link here).

It all got me thinking more about the character; at least enough to fill a short blog entry, anyway. So here goes.

While I certainly own and have read some of his comics, The Punisher isn’t a character I’ve particularly liked. Not to the point that some fans obsess over him, anyway. He’s relatively interesting and can be an engaging character, as the Daredevil show proves. Punisher has enjoyed good runs by some creative teams, like Chuck Dixon and especially Garth Ennis. Most of these runs focus on Frank Castle doing what he does best: hunting down and killing criminals. It’s his entire calling. In a way, he’s like Batman: family murdered, pledges vengeance, goes after criminals.

Of course, the difference is that Punisher not only kills criminals but unrepentantly slaughters them. He’s an unstoppable, emotionless machine that would make even Arnold Schwarzenegger reconsider facing him.

For the most part, that’s really all The Punisher does: hunts down and kills criminals. Runs like Garth Ennis might focus more on the criminal side, giving them more characterization, while we see snippets of Frank prepping to take them down. Or there might be a Doctor Who-like take, like in Greg Rucka’s run, where Punisher takes someone under his wing as a partner to help them seek out vengeance. Like Doctor Who, Sergeant Alves teaming with Punisher was strictly non-sexual. It was completely professional.

To be fair, Remender’s Franken-Castle was a lot of fun.

Then there are some completely oddball, out there runs like Rick Remender’s Franken-Castle (Amazon link here), where someone brings Frank back to life as a Frankenstein-like monster. Or the time Punisher was granted supernatural powers by angels and ordered to hunt down demons. No, really, that was a thing. It happened right before Garth Ennis’ run, and he quickly dismissed it. Then you’d have Frank back in proper Marvel Universe, with Matt Fraction’s run that tied in with the Civil War event.

The thing is, though, The Punisher is a lot like your average revenge film. Former military or former cop or former whatever loses loved ones to bad guys, they come back and slaughter them by the end of the movie. Except that’s just one movie. The Punisher has been continuing with that same story for FORTY YEARS. His stories all really boil down to “Punisher hates criminals, Punisher hunts criminals, Punisher kills criminals.” There’s little difference between each story, no matter the creative team. 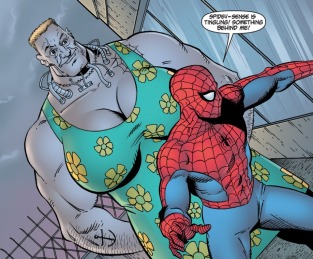 Some of those returns were pretty ridiculous.

For a forty-year-old character, The Punisher doesn’t have a deep mythos like other iconic comic book characters. Because he’s a loner, he’s rarely had a supporting cast (or at least a long-standing one). He doesn’t have a large or diverse rogue’s gallery – largely because he’s killed them. Most Punisher stories end with him killing his supervillain. Sure, some return like The Russian or Jigsaw, but for the most part, it’s a one-and-done deal.

The more I’ve thought about him, the more I realize The Punisher is very one-note. Worse, the way he’s designed, you can’t really develop him without losing his essence. He can’t have a supporting cast because he either pushes them away or they get killed. You can’t give him a love interest or any kind of happiness because his vengeful rage is what drives him. Unlike superheroes (it’s difficult to call Punisher a superhero) who have that wiggle room of the possibility for love interests, raising a family, etc, if you do that with Punisher, you basically lose The Punisher.

It’s a shame that Marvel continues publishing solo Punisher comics because I honestly feel he works best not in a starring role in a solo title, but as an antagonist for morally upright characters like Spider-Man and especially Daredevil. He works as a moral opposition, which Daredevil’s second season perfectly showcased.

Jon Bernthal’s portrayal of The Punisher is a man slowly losing his humanity as he goes on his crusade. On the one hand, you empathize with what he’s become and the surrounding circumstances. On the other hand, he’s a total psychopath who, as you get to know him, is utterly terrifying. He’s not a character to be liked or empathized with because you realize very soon that he’s a lost cause. A lost cause compared to someone like Daredevil who still holds firmly to his moral fiber, despite temptations from both Frank and Elektra.

At the end of the series, we see The Punisher truly born, donning the iconic white skull symbol. While he completed his path of destruction to avenge his family, he’d transformed into a monster that wouldn’t stop both because he couldn’t stop and because he didn’t want to.

When it was announced that The Punisher would appear in Daredevil’s second season, fans began asking when he’d get his own series. To which I ask: why? His story is basically done now. He got his revenge and now he’s just the dude who kills criminals. He isn’t Dexter, who leads a double life, hiding his secret from his family. He’s the same character as any revenge-fueled action film. Once the vengeance is fulfilled, what other stories do you tell about him? Again, you can’t give him a love interest or a supporting cast because it destroys the dehumanized, angry loner character that The Punisher is supposed to be. That point goes double for the comics.

I’ll finish this up with one final thought: what boggles my mind the most isn’t why Punisher still gets solo series. If people enjoy them, all power to them. Many superhero comics have been telling the same stories for decades with only a few tweaks, so why can’t Punisher? But here’s a two-part question:

One, if Punisher is part of this shared universe with all these characters that are all morally upright in comparison, why the hell is he allowed to operate? He’s caused more death and destruction than many villains in comparison. True, because of his military training and precision, he very carefully avoids collateral damage (lest he becomes no different than the monsters that gunned down his own family). But why do all these heroes keep looking the other way?

Seriously, why don’t more criminals do this?

Two, supposing Punisher has been allowed to operate for this long, how the hell are there any criminals left in New York City? Either they’d all be dead or eventually, they’d all say, “Screw it, I’m out. It’s not worth it if Punisher’s still operating.” How would there be any mafia families around if Punisher keeps slaughtering them wholesale? Surely these families would start running out.

As I said at the beginning, The Punisher isn’t a character I particularly like. I get his appeal and I’ve occasionally enjoyed him, but for the most part, he’s a one-note character that despite having nearly zero character development, has had almost the exact same story for almost 40 years. He isn’t like other comic book characters that can tell different stories with their various villains or supporting cast. And there’s only so many times you can see him and Daredevil clash over scruples, with Daredevil giving the same speech almost every time.

Writer and creator of the Armadillo Mysteries, I've had a passion for the creative arts all his life. I'm an avid comic book fan, a DDP yoga practitioner , and urban cyclist.
View all posts by Nick C. Piers →
This entry was posted in Comic Books, Essays and tagged chuck dixon, comic books, comics, Daredevil, garth ennis, greg rucka, marvel comics, Netflix, the punisher. Bookmark the permalink.