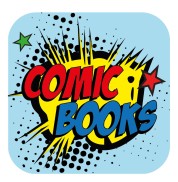 In an effort to get out of the house more while being unemployed, I’ve been hitting up the library for comics. I’ve enjoyed several books and series I haven’t been able to check out before. Some, I’d never even heard of before now.

ALEX & ADA, by Sarah Vaughan & Johnathan Luna. Really good sci-fi book about androids. There’s some allegory about “coming out” and also hiding your true self. Whether it was intentional or not, I read it a bit as a transexual allegory. It’s basically a love story, but I grew to really appreciate the two main characters. The character art is a little stiff at times, but I’ve come to expect that from Luna’s work. 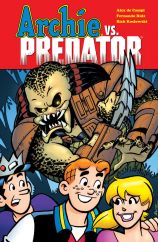 ARCHIE VS PREDATOR, by Alex de Campi & Fernando Ruiz: Pure fun. I can’t remember them now, but there were several jokes that had me rolling. There’s absolutely zero continuity in this, which means every character is expendable. It was MUCH gorier than I expected for a comic featuring Archie, but it’s still a lot of fun. 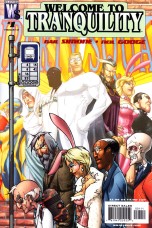 WELCOME TO TRANQUILITY, by Gail Simone & Neil Googe: I’d heard about this for a long time but never picked it up. It’s okay. It’s a murder mystery in a small town filled with retired superheroes. I kinda figured out the mystery early in. 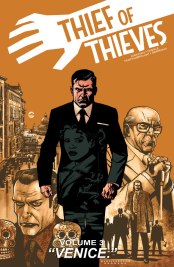 THIEF OF THIEVES, by Robert Kirkman, and various others: A world-class thief picking jobs while also cleaning up messes made by his fuck-up son. It’s not bad, but wouldn’t give it a big recommendation. The characters are mostly forgettable, but the story is pretty engaging. Really great action, especially. I hear this is planned to be a TV series, so I’ll probably check that out, at least.

EMPIRE, by Mark Waid & Barry Kitson: Been wanting to read this for a LONG time but never got around to it. Great comic about a Dr. Doom-like villain who conquers the world, then asks himself, “Okay, now what?” One shocking and heart-breaking scene near the end had my jaw dropped for several minutes.

NAILBITER, by Joshua Williamson & Mike Henderson: Really good horror/thriller book about a small Oregon town that has given birth to SIXTEEN serial killers in its time. I will definitely be picking this up when I have money again. If you like stuff like Dexter or Hannibal, I highly recommend this one.

A TOWN CALLED DRAGONS, by Judd Winnick & Geoff Shaw: Flipping AWESOME. Seriously, it’s like a small action flick, like Tremors, only with dragons. If that doesn’t sell you, nothing will. Major recommendations. I hope it gets made into a movie someday. 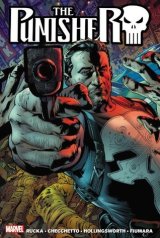 PUNISHER, by Greg Rucka & various artists: This includes four volumes in total, ending with the Punisher: War Zone mini-series. Greg Rucka is, hands down, one of my favourite writers. I’ve loved most of his comics and I’ve read most of his novels. And this was…okay. It wasn’t bad, but it wasn’t great. I think it’s largely that Frank Castle isn’t really the main character her; his new sidekick or partner, Sargeant Alves is. And that’s okay: Rucka’s best work has involved female characters. But Castle is less a character here and more a force of nature. He basically takes the backseat to Alves and other side characters. Still great art and action, though.

FATALE, by Ed Brubaker & Sean Phillips: I was finishing off the series here with volumes 4 & 5. I’ve often said that Brubaker & Phillips are impervious to a bad comic. FATALE continues that belief. This Lovecraftian horror tale makes the femme fatale character the main character. To be honest, even though it’s just as well-written and drawn like any Brubaker/Phillips creation (like Criminal, Sleeper, and Incognito), I struggled to get into this series. I think it as the esoteric, otherworldly, Lovecraftian kind of goes over my head. Maybe I’ll give this series another chance some day.

SUPERIOR, by Mark Millar & Leinel Francis Yu: I don’t like a lot of Millar’s work. I think Superman: Red Son is overrated. And while I don’t hate his Ultimates work, I view it mostly as big, dumb, summer blockbuster, like a Michael Bay movie. His non-DC and Marvel work, on the other hand? Hate it. Kick-Ass and Wanted feel like they were written by a 12-year old who learned they could add sex, violence, and profanity into their stories. Superior sometimes falls under these similar sins. The characters swear far too often and the dialogue is honestly very unoriginal. That said, the concept is much more positive in the end and it feels in some ways as a love letter to Superman and Shazam. I can see why some people liked this over his other creator-owned work. For one, I don’t regret reading one of Millar’s creator-owned work. If I ever find this somewhere very cheap, I might even buy it for myself.