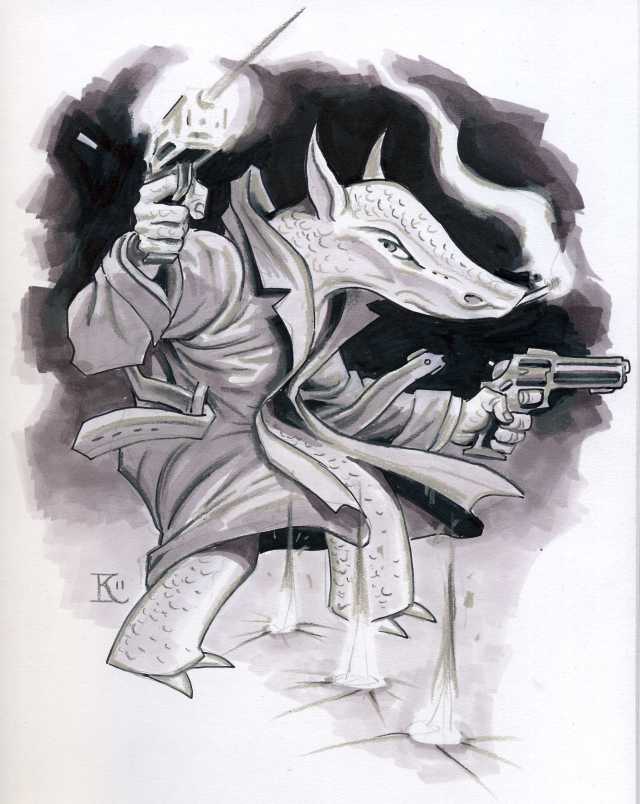 When I attended Toronto Wizard World in 2011, I brought along a sketchbook. My hope was to get several artists to sketch Dill. I imagine some of them talked with each other afterwards and referred to me as “that armadillo guy.” For the most part, though, they were very open to the idea and in fact, had fun drawing it.

I’d been familiar with Kent Burles work for many years. His worked appeared in several Palladium role-playing books, especially in some of my favourite Heroes Unlimited books like Century City. Being a huge fan of Jack Kirby’s work, I admired Kent’s very unique art that unquestionably had inspirations from Kirby.

When I walked up to his table at Wizard World, he was working on a sketch for someone else. He was still cordial and willing to do another sketch, but clearly wanted to get the sketch at hand done. However, the very moment I name-dropped Jack Kirby, he put down the sketch pad, laid down the pencil (or marker), stood up, folded his arms, and suddenly I had his complete and undivided attention.

We shared Kirby stories, such as the ones I’d read from the work of Kirby’s biographer, Mark Evanier. We both clearly loved The King of Comics and his gifts to the comic book business.

I wasn’t able to attend the con the next day to pick up the sketch, but a friend of mine did for me. I was astounded at the detail put into the sketch of such a silly character. He had Dill’s personality, attitude, and world down to a tee. The look…well, I always pictured Dill to be more rotund to go with the frame of an armadillo. But that’s a minor nitpick at best. Without taking anything away from the other artists, this is definitely my prized possession of Dill-related art.

You can see more of his jaw-dropping work by clicking on the picture.

Writer and creator of the Armadillo Mysteries, I've had a passion for the creative arts all his life. I'm an avid comic book fan, a DDP yoga practitioner , and urban cyclist.
View all posts by Nick C. Piers →
This entry was posted in Art, Dilbert Pinkerton and tagged Dilbert Pinkerton. Bookmark the permalink.