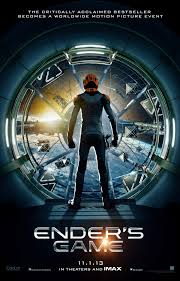 With the release of the first full trailer of Orson Scott Card’s Ender’s Game, the arguments have been reborn and the talk of boycotting the movie has been reignited. Card’s views on homosexuality has slowly become more common, public knowledge. Not only is he vehemently against homosexuality, but he is on the board of directors for the National Organization for Marriage, who seek to “preserve traditional marriage.” I won’t go into the hilarity of the idea of “traditional” marriage when it wasn’t too long ago that a Catholic couldn’t marry a Protestant or even a Caucasian couldn’t marry an African American.

No, what I’ve been struggling with is whether or not there Ender’s Game should be boycotted due to Card’s views. Already, Card has had a short story removed from a new Adventures of Superman comic because of the huge backlash against DC for including his work. I can’t help but wonder what sort of backlash – if any at all – will occur for the movie.

I’m honestly torn on the subject. On the one hand, as a straight man who supports gay rights, I abhor the idea of this man getting more money, part of which would be used to fund his battle for “traditional” marriage. On the other, should his opinions affect his written work or should they be standalone from the author? It’s hard for me to come to terms on either side.

Speaking as one myself, I believe it’s impossible for an author not to put themselves into their written work on some level. Not all of their worldviews would make it into any one work, of course, but to write a piece of fiction is still a very personal, individual thing. It’s the product of decades worth of experiences and inspirations. A writer’s product is filled with their idiosyncrasies, opinions, and feelings, whether they’re intended or not.

Edgar Allan Poe, for example, is one of my favourite writers. He was undoubtedly a brilliant writer, but he was a bit of a nutjob in some areas. For example, he studied and believed in the idea of phrenology – the psychological study of bumps on the head, which heavily influenced his writing of The Fall of the House of Usher. He was also a proponent of slavery, evidenced by The Murders in the Rue Morgue. Rue Morgue, and it’s main character, Dupin, inspired Sir Arthur Conan O’Doyle to create Sherlock Holmes, which essentially gave us the detective fiction genre as we know it.  Yet Rue Morgue also buries the message of the “evil black slave uprising” by anthropomorphising the threat into an escaped gorilla who murders two women in ways that mirror a slave upheaval around the same time.

And yet, despite the fact that he was a raging racist, I can still read Poe’s work in awe of his command over the English language. After all, it was just one story and doesn’t speak for the entirety of his work.

So why can’t I overlook Card’s stance on homosexuality and enjoy Ender’s Game? After all, I’m a huge fan of science fiction. The premise sounds quite enthralling, where children are trained as soldiers to battle an invading alien army. Some friends – both online and off – have raved about the books, saying that they grew up on them, reading them as young adults. From what I’ve heard, the idea of homosexuality doesn’t even come up in the books.

It’s not even the fact that buying the books would put cash in Card’s pocket; cash he would then use to continue his battle for “traditional” marriage. I don’t even want to touch the books this homophobe has written.

And yet, I can still enjoy the work of a racist. Although I’ll admit, I didn’t know that about Poe until I took a course to study his work. But then, if I hadn’t taken that course, I wouldn’t have appreciated his writing as much, either.

I think of what would happen if I were in Card’s shoes. After all, I don’t have the same opinions or worldviews as everyone else. What if I became a huge, bestselling author known world wide…and then it was revealed that I had a very controversial opinion, view, or value? That opinion, view, or value isn’t actively present in some of my works, so would I want people to judge my work on that? No, of course not. I would want people to enjoy my work because it’s either entertaining or a really great piece of literature (more than likely the former than the latter). Maybe if that work were studied, torn apart, and dug into, that that particular viewpoint was actually buried somewhere in the writing, then I could perhaps see the point. But that doesn’t seem to be the case in Ender’s Game or, in fact, much of Card’s work.

So, I’m torn. It’s something I’m trying to come to grips with. I don’t want to just say “No, I refuse to read the work of a homophobe” because as I said above, I wouldn’t personally want my opinion held against me for something I’d written that’s entirely separated. Yet it’s hard – if not impossible –  to separate the author from the work. Blood, sweat, and tears (especially the latter during editing) go into the creation of a creative piece. That’s part of the creative process. The whole point of the creative process is to put something of yourself into it and then share it with the world.

I’ll finish up by saying that, even after writing all of this, I’m still torn on the issue. I still don’t want to support Card. I’m a firm believer in social equality and he is fighting exactly that.

But then again, so did Edgar Allan Poe.

Writer and creator of the Armadillo Mysteries, I've had a passion for the creative arts all his life. I'm an avid comic book fan, a DDP yoga practitioner , and urban cyclist.
View all posts by Nick C. Piers →
This entry was posted in Essays and tagged essays, writing. Bookmark the permalink.