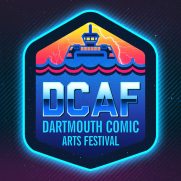 When I lived in Toronto, I had the chance to go to three nerd conventions: Toronto Expo, Wizard World, and Anime North. To be honest, I became a little disillusioned with conventions, especially after Toronto Expo. It was enjoyable to meet some famous people, like Ted Dibiase (and Virgil), Nicholas Brandon, and former wrestler Kurrgan. Plus, meeting all sorts of my favourite comic book writers and artists. But after awhile, it just felt like an over-commercialized flea market. The biggest companies rented huge boots, like Fox promoting the Alien Quadrilogy on Blu-Ray. It seemed like such a waste of space for what should be a chance to mingle with celebrities or get an art commission by an artist. For years, I didn’t bother going to Martime conventions like Hal Con.

Today, though, I had the distinct pleasure of going to the Dartmouth Comic Arts Festival.

What I appreciated about this convention – which was created and run by comic book store Strange Adventures – was that it was focused entirely on the artists. Only a small handful of artists – the marquee names like Nick Bradshaw and James White – had more than one table. Even Kate Leth, who I would call a marquee name, only had one table for herself. There were no large booths for Rogers or Nintendo or a major movie studio. No, it was all tables for local, independent artists. And a few comic shops and such.

I feel a little bad about this now in retrospect, but I discussed and displayed a copy of The City of Smoke & Mirrors to a number of artists. As I’ll post in a moment, I got sketches from some artists. But yeah, while I did talk to many artists and ask about themselves, I also took a small bit of time to mention or show my book. Most were very interested, or at least appeared to be. While discussing it with one artist, someone overheard me and asked if I had a card. I didn’t, but I took theirs. They were an another artist. SO MANY ARTISTS. Even ones without tables!

There was also a small publishing studio here in Halifax that was just starting out. In fact, I might see if Capsize Comics have need of writers.

In the meantime, check out my haul! Bam! 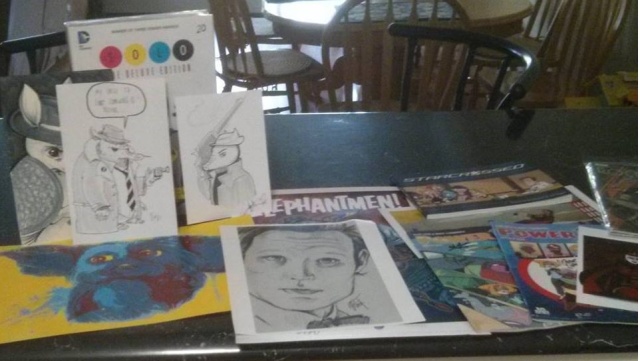 Prints include Gizmo from Gremlins, Doctor Who’s Matt Smith, Hexadecimal (from Reboot), a small Superman print (buried under the Power Up comics) and a great Elephantmen poster.

Kate Leth was clearing out her comics and kindly sold me the Solo deluxe edition for $20.

A 4-pack of Rocketeer comics from cover artist James White.

A copy of Starcrossed Vol. 1 from Joel Duggan.

Speaking of Joel Duggan, here’s what his character Sam was reading on the first page of Starcrossed. That Sam’s got good taste in books, I tell ya. 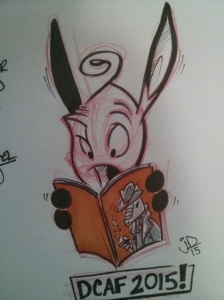 I finally got my awesome friend Kelly-Jo to draw Dill! No surprise, she knocks it out of the park. 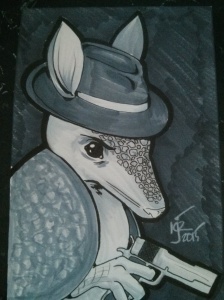 My girlfriend actually snuck away with a copy of my book to get this sketch by April M Designs. 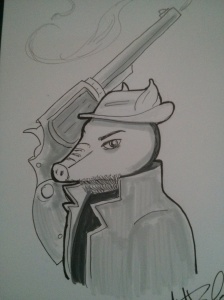 And finally, Brennan Bova, who drew a very fat Dill! Fun fact: I’ve always pictured Dill to be pretty chunky, but Brennan’s the first to make that visualize Dill like that! 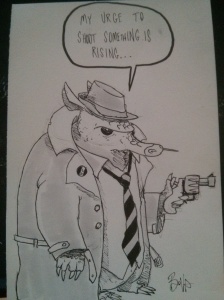 So yeah, I had a great time at DCAF. Honestly, I never know what to say to these people. I honestly feel a little bad just walking away without buying anything. It’s kind of a flea market environment, with each table selling something different.  In this case, though, they’re selling their own personal creations.

In retrospect, I should’ve printed out some business cards to hand out. It seems like EVERYONE had business cards. I fully intend to get some printed when The Dame was a Tad Polish comes out in the fall.