As I’ve mentioned on the blog before, Superman is my favourite superhero. In any list of favourite superheroes, he always tops them. But Daredevil is unquestionably second on that list. I love his rich backstory. I love his unique powers and that he’s one of the most iconic disabled characters in comics (along with Professor X and Oracle). I love the fact that he’s one of the few comic book characters who is openly religious (Irish Catholic) that’s very essential to the character.

So yeah, if there’s one character that may rival Superman in how many books are in my collection, it’s Daredevil. By the way, if you haven’t been reading Mark Waid’s run on the character in the last few years, shame on you. It’s great, even if you’re not a fan of Daredevil.

And as a fan, I can’t deny that I’m absolutely excited for the upcoming Netflix exclusive series, Daredevil.

Every discussion about the new series, however, autotmatically makes a lot of people bring up the 2003 film, Daredevil. Which certainly didn’t introduce a new audience to the character and in fact, turned a lot of people away from even trying him. Honestly? …I actually liked it. Let me explain. Spoilers ahoy for anyone who hasn’t seen this.

(Also, following my review, I’ll briefly discuss my thoughts on the upcoming series.)

First of all, let me be clear that there are two different versions of this film: the theatrical and the director’s cut. The director’s cut makes some significant changes and additions that vastly improve the product. For example, there was a glaring plot hole at the end as to how exactly the police learned that The Kingpin was Wilson Fisk. With a new subplot involving a murder (and Coolio!), that’s been fixed. The movie is also a bit darker in the director’s cut and some swearing is added (“I want a fuckin’ costume!”). And the sex scene has been cut out, which means a little less Jennifer Garner, which is a good thing in this movie.

Second, don’t get me wrong. Even with the director’s  cut’s fixes, the film is not without its problems. Jennifer Garner is so horribly unsuited to the role of Elektra (even though she’s pretty hot in everything she wears) and pulls down the movie with every appearance. The CGI models that replace characters in some scenes are glaringly obvious. Daredevil killing at the beginning is a big departure from the character. I think the hyperbaric chamber that Matt Murdock uses to sleep is a going a bit far (though an interesting idea for the character). I’m not really a fan of the leather costume. And I think they tried to put too much into this with both Bullseye, Elektra, AND Kingpin, giving us basically two end boss fights. Seriously, the last half of the movie is just “He fights Elektra, then he fights Bullseye, then he fights Kingpin.”

I mean, just look at this face! That’s hilarious.

But everything else? I still enjoy it. The soundtrack, for example, has some great songs in it. Colin Farrell is deliciously hammy and steals every scene he’s in, showing he’s having a total blast (and to be honest, the hamminess suits Bullseye). Michael Clarke Duncan is PERFECT casting for Kingpin, for his size, stature, overall menacing feel. And honestly, I like Ben Affleck in this, too. He makes me believe he’s blind. He makes me believe that he’s a broken, tortured character who tries to put on a brave face in front of his friends. I love how much effort they put into showcasing his blindness, from the echolocation effects to the little touches like how he folds his money to put in his wallet every morning (something legitimate blind people do).

*shiver* The horror. My god, the horror.

As far as the film goes, I think there’s a lot of things to like in this movie that balances out a lot of its faults.

As for the Netflix series? I’m looking forward to it. It looks like they’re taking a page more out of the noir leanings of Frank Miller, Brian Michael Bendis, and Ed Brubaker. That’s different from Mark Waid’s current run, which is brighter, more light-hearted, and leaning stronger to the superheroic side, but that’s fine. Daredevil’s character is well suited to both styles. He’s a very versatile character who can survive well both in a lighter style and in a darker, noir style. At the very least, I think the show will introduce new fans to the character, finally show them what he’s capable, and why I’m such a big fan. 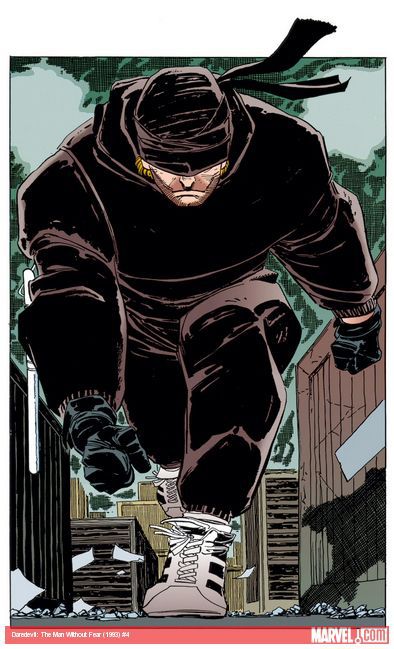 Some people have complained that he’s not wearing the iconic red and horned costume. Instead, he’s wearing an all-black costume and matching mask. Which…I don’t have a problem with. For one, the creators of the show have said this is an origin story and that the costume will evolve as the show develops. Secondly, the costume is reminiscent of Frank Miller’s The Man Without Fear, also an origin story.

Honestly, if I had any criticism from what I’ve gleaned of the trailer so far, it’s the lack of opaque eyes on Matt Murdock when he’s not wearing sunglasses or a mask. Being blind and having the opaque eyes is a major part of this character. We even saw it in the 2003 film. Still, it’s a minor complaint at best because, as I said, he’ll be spending most of his time wearing sunglasses or a mask, anyway.

So yeah, that’s my thoughts on the upcoming show and a short review of the 2003 movie. I love the character and I’m glad he’s finally getting another chance at introducing new audiences  to him.

Writer and creator of the Armadillo Mysteries, I've had a passion for the creative arts all his life. I'm an avid comic book fan, a DDP yoga practitioner , and urban cyclist.
View all posts by Nick C. Piers →
This entry was posted in Comic Books, Movies, Reviews, TV and tagged Daredevil, Marvel, Netflix, Review, TV. Bookmark the permalink.